Josh is sitting outside, playing with a tootsie pop he bought at Dairy Carry. The bmx kid rolls up, unaware. Looking at the sky, squinting. Dainty-eyed. A passenger with seven umbrellas glides by, hovercrafting his way through the sad Chicago maze. Josh knows, him and that bmx kid might make it to a park. Eat some pizza. Drink water again. The bmx kid shoots him an angry look and peels out left, stage left.
A Bright truck rolls by;
pausing on the corner. Pausing.
Really Though.

Josh stops and thinks “maybe this isn’t all that bad”. Just at that moment, Isaac looks in the mirror and sees a grey smudge on his collar. His thoughts go to a knife, then a paper towel, then a bridge, then a bird. The brilliant White Light From The Sky.
A new Dawn.
A future beyond discrimination.
Beyond Hope, Beyond Fear.

Each day the bmx kid does something different, often he lifts the paint from windowsills with rusty department store razors, left in the gutter. Unknown. Unclaimed. Dirty floors, cold linen. He Needed A Break That badly.
He looks at the bus stop, the sky. The heat, peeling off the floor.
It is relevant, yet distant.

He hears a open/close from a department store door; he knows he Must Return; be healed. Somewhere.
Life
...
TBC 2017

3:12 am ??? Likely Denver
Outside Marcus waits,
a cold lunch in hand. He is clutching a pile of something silver; Isaiah cannot watch. He calls Menosha on a conference call and throws his phone at Marcus, who quickly dismantles it and begins crying, with a hard on.

“Can’t we all just go camping,” “maybe get a Hotel Room?” says josh, looking at the window.

“Where you are is hard to explain” says a voice, distant but somehow omnipresent.
Iris just laughs.

They are drinking the light
from above
as below.

Isaiah & Elijah at mini-mart #7, staring at the sky blankly.
They make a group decision to just get water and walk to
the beach. As they are walking, Josiah offhandedly says
“The truth would just make you sad, kid”.

Isaiah & Elijah look around in puzzlement, & then realize
he is perched on a ladder, stoically painting a wall grey.

They finally entice him to join them after much adieu &amp;
debate. Hemming & hawing. As they walk down
Lexington Avenue together, thinking only of what is in
front of them, Isaiah whistles a little tune.

Josiah looks at his feet wistfully, wishing it were later
than it was. “You think there’s a way around this?”, says
Isaiah, looking up & squinting at a pile of bricks and
broken mortar blocking their path. Plants are growing
through the pile here and there, and a sparrow perched
above it all looks down at them quizzically and tilts its’
head. “What now?”, the bird seemed to ask. 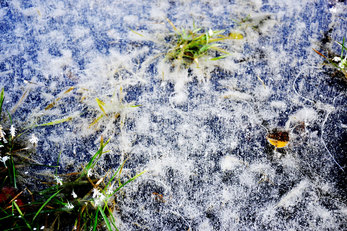 Zach is an artist working primarily with the written word for the time being,
but he also dabbles in countless other mediums. He is an explorer and a whale. His
imagination knows no bounds. He hopes to someday do something as epically
appropriate and symbolic as Van Gogh cutting off his ear to communicate to his
cultish followers that he is not that big of a deal. He loves French toast, and is
rumored to be engaged to the queen of france. At last estimate, his finances totaled
five cents. He also likes French fries, but wishes that we could all just secretly get
naked &amp; eat salal berries with some pan fried deer meat. He has recently half-
heartedly committed to being “kosher and vegan”, which his mother finds puzzling.
He is thirty two. His favorite color is philosophy.