1.
The Assassin eats breakfast.
It's a Holy watch that's wrapped around his wrist.
He smokes a Holy spliff.
He washes his legs and makes himself perfect and beautiful.
He knows what he kills for.
He thinks his body is a gooey machine.
He has a raspberry milkshake and washes his hand and puts on his spacesuit.

2.
Vagueness at the edge of the table.
It's a temperature that's always changing.
A prick on the fingertip draws a little blood
which engages the boot process in the basic input/output system of the ship's central computer.

The Assassin tells himself he doesn't get lonely and tries not to think about raspberry milkshakes during his voyage to Ohio.

3.
I think about the Assassin
while getting into my thin rubber stereosuit.
He has different faces for everyone.
He's sinister because he seems so harmless.
He thinks things are Endless.
He thinks with his joints and his knuckles
and uses a radical rubber dogma
to propel himself through the the thin sewers of Terminal Filth.

5.
Contracting vessels pull jets of lively electric blood through the system.
A nova
in the left iris scatters golden green apples across your superscape eyes.
You look at me and it fills my veins with your enflamed blood
and my skin takes on the texture of yours.
Life explodes from every shadow and porous corner,
out from every tipped-over bottle and from under every cigarette pack.
Your perfumed blood beats in my brain
like the buttery pulse of wetness at the edge of my island.

6.
The Assassin has the luxury of seeing life as just a game.
He doesn't know the stakes.
Treats people like pieces,
tricks them into trading places.
Always secretly terrified
of the wetness at the edges of his eyelids
the sea that threatens to engulf his everything.
His nylon skin shrinks from contact.
His tiny fingers try to look meticulous.
He wants to believe in something other than an anchorless ship on a portless ocean.
Poor Fool. Pitiful idiot. Poverty of the heart like all those demanding vacant mirror-eyes that glare down from the scrapers that make up the
Superscape.
It takes a telescope to see his facial expressions,
rubber arrows running down his dimples when he scowls,
populating microscopic Cities with hateful little would-be hitlers.

7.
You look up through the tangled undergrowth.
You uncrumple my discarded memoirs
and release a blue-green glow from where your fingers touch the paper.
My neural pipes hiss pent up pressure of gas-release .

Your smile at the edge of the divingboard
sends sonar rings out the probe the contents of my hair-forest,
not knowing that it' your forest I'm lost in.
Poised in frozen motion
with your hands holding eachother and one foot slightly up,
you wait til our smiles touch and then plunge
into my Stomach
through folds of rubber, paper, skin, glass, icecream, Escher, soil, milk and Nighttime.

8.
You wake up in a shiny clinical environment,
a room with a chair and a television set.
The chair is bolted to the middle of floor and set facing the TV which is built-in to the wall.
The TV is off.
You sit in the chair and the TV turns on.
You see me on the screen, walking diagonally against the rain
clutching the Moth to my chest
to keep its eyelids dry,
trying not to show the audience my smile, somehow proud of my pathetic posture.
Now you start to see what i can live through
what i can endure.
I say hi to Kyle and let him see the Moth.
He tells me what kinds of water will be good for the following week
and brings me up to speed on the coup against the Red King.
You see me climbing chainlink fences with different-colored ponds behind them
frantic as the little moth dries up in my red arms.
Up to my neck in Assassin's gelatinous blood,
you see the Assassin crouched over my dirty body
plucking out shiny white porcelain intestines from my laughing stomach.
I'm squirming because it feels so hilarious.

I am the pond in the valley.
All the animals drink from my Stomach
bringing water from me and putting it on to the Ground.

1.
Cut to long shot of the valley,
hemmed-in breezes play with the treetops
like Your fingers in My hair.
It's almost as if I can see You in that clean little room
leaning forward in the chair, blowing onto the screen.
One of seven fountains gurgles up bursts of pus (the healing ooze that binds broken-skin).
You can't stand seeing the animals crowded in a circle around me, eating the entrails out of my stomach.
You stand up and the screen goes to black.
You pace around the room for a few minutes
breathing quietly to yourself.
At length you go back to the chair again.
The TV turns on the instant you sit back down.
You see me on the screen, walking sideways against the rain
clutching the Moth to my chest to keep its eyelid-wings dry.
I keep calling but nobody answers.
Maybe because my phone is a soaking wet slice of pizza.
I realize this as I watch a dollop of marinara creep over my wrist and slide down my skinny arm.
It hesitates when it gets to my elbow,
a perfect balance
between gravity's siren song
and fear of a great distance
a perfect spell, an absolute silence broken by a stray slice of mushroom adding its weight to the sauce.

You see the Valley hug the Moon to its breast.
It's tongue weather between the hills tonight.
The Moon makes it all look smooth like wet porcelain.
You see the pond slowly lift its chunky body
to do a small dance in the gooey lunar glow
undulating to the hum
of the hillsides' salad song,
each blade of grass a tiny trumpet
a gathered particle of light.
Marinara fountains from the stomach,
spouts from the summit and runs red legs down the dimples in the hills.
A cloud hangs its chunky body over the Valley
and fills itself with luminous moonglow.
The hillside oscillates between existence and oblivion
as cloudshadows play tag across its treetops
making branches into faces
whispering secret Sapien Songs.

3.
Camera shows you the valley through the eyes of the Moth this time.
You step through the screen and onto the grass
clutching your mesh eyelids/
To stifle the blinding and luminous tremelo.
You see the hills in italics--
almost falling over.
You see the Valley's soily stomach gently heaving giant breaths.
You feel terrified of this pregnant silence,
swollen in a perfect tension balance between inhale and exhale
between the urge to exist and the urge to contain.
You look into my eyes--
one eye shows my love of everything
the other shows my hatred for it all.
So you look at my mouth instead
because at least it can laugh and cry at the same time
without having to oscillate.

4.
We see Sun and Moon hanging in the same Sky.
It must be either Dusk or Dawn.
Or both.
Or neither.
Or all of the above.
We've been chewing on this strange, warm root for I think weeks now.
huddled  together in a cavern in the underbrush
trading Sapien Songs from tongue to tongue.
Huddled under the Moth's doublewide wings
sending up curious children's looks to the sky's double-burning eyeballs.
The root we chew is still attached to the Earth
and seems to go a ways down, to some pretty old secrets.
We mewl and paw at the little mountains of dirt that make up our bed
sending tiny songs
upward in a cheshire crescendo,
a silver-toothed crescent smile,
until the eyelid-winged Moth,
out child, home and protector
gets fed up with our dumb dance
and Abandons us
and ascends to lid the Valley's double-burning eyes with its wide paper wings
leaving us shivering naked in the wind
with our tongues folding over themselves
over and over
until a tiny hole opens up in the bottom of the Pond
slowly sucking everything down
spinning the trees and animals down into itself in a dizzy dance of terror/ecstasy
sucks the City down from the sky
until the whole Thing's drained
as if it's left unsaid. 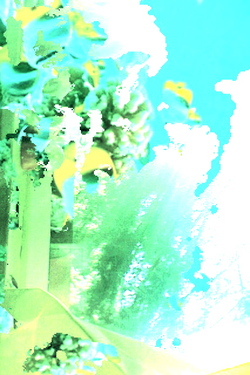